There is significant debate in the literature as to what lens would have the most efficacy and safety in patients with poor capsular support. The options include flexible open loop ACIOLs, iris sutured PCIOLs, and scleral fixated posterior chamber intraocular lens (SSIOL).  The AAO Ophthalmic Technology Assessment Report reviewed the currently available lens options and they concluded that there was insufficient evidence to demonstrate superiority of one lens over another.  The majority of the studies on which this conclusion was based on short term studies with few patients within each study.

Theoretically, posterior chamber lenses have a variety of advantages over ACIOLs.  While open loop ACIOLs have evolved significantly from their closed loop predecessors, many of the same complications have been reported.  SSIOLs do not occlude angles and therefore may be better in patients with narrow angle or primary open angle glaucoma.  Even with modern ACIOLs and flexible open-loop models, complications such as peripheral anterior synechiae formation, hyphema, uveitis, and cystoid macular edema have been described.  Furthermore, in an age where there are more options for those with endothelial damage such as lamellar endothelial keratoplasty, posterior chamber lenses would less likely develop endothelial compromise over time.  Iris fixated lens and ACIOLs have been associated with pigmentary release and subsequent pigmentary glaucoma.

However, the implantation of SSIOLs has been reported previously as fraught with complications, it technically difficult, and requires additional surgical time. These complications have included knot erosion or broken fixation suture. The combination of pars plana vitrectomy (PPV) and lens implantation has been advocated, but adds to the potential complications of PPV include the formation of hemorrhagic or serous choroidals, iatrogenic retinal breaks, and retinal detachments. Modern instrumentation and techniques have improved the outcomes greatly including small gauge vitrectomy, the use of Gortex suture, and 4 point fixated lenses. In the video below I demonstrate how these modern techniques can be used to improve outcomes. 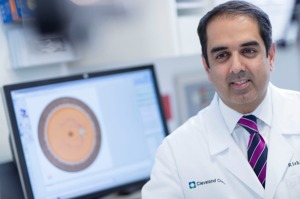 DrRishiSingh.com was created to provide information and education regarding related topics covering diseases, treatments, and innovations in ophthalmology.